The Short-eared Owl is medium-sized owl (34-43 cm), with yellowish-brown streaks on the breast and back. 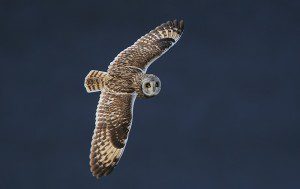 Short-eared Owl with is distinctive large head and face disc

The Short-eared Owl is medium-sized owl (34-43 cm), with yellowish-brown streaks on the breast and back. Like many owls, it has a large round head with small ear tufts. Its has a grey facial disk and yellow eyes circled in black. Their “short-ears” are actually feather tufts. In flight, a characteristic dark patch can be seen on the underside of the wing.

Short-eared owls are mainly active at dusk and dawn. They hunt and roost in the summer in open grassy habitats such as coastal dunes, coastal heathland, marshland, abandoned pastures and hayfields. In the winter they roost in dense hedges and islands of coniferous forests adjacent to grassland agricultural fields.

Short-eared owls nest on the ground (unlike many other owl species), typically in grasslands, dyked wet meadows, marshes, and coastal bogs. The young owlets learn how to walk and run before they learn how to fly.

Short-eared Owls can contribute to rodent control making them a beneficial species to have on your farm. If nesting near croplands or orchards, they’re presence (as well as other hawks and owls) may disrupt problem bird species foraging in these areas. A short-eared owl flying over the ground where it nests

Where possible, try delaying haying or harvesting crops after nesting season (after July 1st) to avoid destroying nests and harming young. Using late-maturing cultivars allows enough time for young owls and other birds to fledge. Conserve agricultural grasslands, hedgerows, shelterbelts and grassy strips and establish them where possible. Try raising the cutting height of machinery and use

flushing bars which will also benefit other at risk birds (Bobolink,

Nova Scotia’s Species at Risk Conservation and Recovery program has lots of great information on bobolinks and you can report a sighting by email to sightings@speciesatrisk.ca