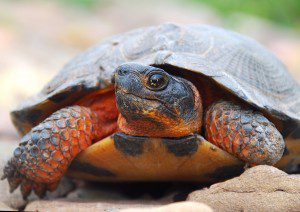 A beautifully coloured wood turtle with bright-orange neck and legs

Wood Turtles are one of the four species of turtles in Nova Scotia (Three of the four species are at risk in Nova Scotia). The Wood Turtle has a bumpy, sculpted shell that is dark grey to brown, with orange markings that appear when the shell is wet. Unlike other turtles, the skin of the throat, tail, and limbs are orange-red. Hatchlings are light brown and about twoonie-sized, and adults are about 16-21 cm long.

Wood Turtles are found in clear, moderately flowing rivers and tributaries in forests or flood plains. They also occur in terrestrial habitats including areas near wetlands and watercourses with dense low growing vegetation as well as forests, hayfields and cropland. Females lay their eggs in sandy bars along rivers and other gravel areas (driveways, roadsides, borrow pits) in June. This is the time of year when wood turtles are most terrestrial and most at risk of being injured by cars and tractors.

Wood Turtles are found throughout the Nova Scotia, with concentrations in Guysborough and Annapolis Counties. They are typically found basking in the sun by rivers and streams in spring; along roadsides in June & July (when females are laying eggs) and August & September (when travelling to overwintering sites). They can also be spotted swimming in waterways; or walking through nearby woods, in the spring, summer, and fall. They are the most terrestrial of the freshwater turtles, but are typically not found more than a few hundred meters away from water.

A wood turtle near a small wetland

Wood Turtles mainly eat slugs, insects, green plants, grasses, mushrooms, and berries, but they will also fight over dead frogs and mice and have even been seen with feathers in their mouths. Wood turtles have been seen tapping on the ground with their hind legs. This behaviour is thought to be an attempt to mimic the sound of rain, which draws earthworms up to the surface where they are easy prey for hungry turtles. 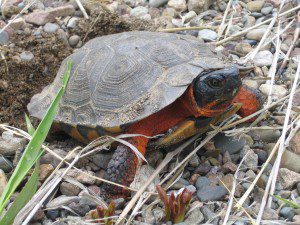 A wood turtle digs a nest among small rocks and gravel

Raise agricultural machinery blades to a height of 10cm to prevent injury to turtles. This also benefits at risk birds that nest on the ground (Bobolink, Short-eared Owl and Eastern Meadowlark).

Create or maintain setbacks and buffers along watercourses.

Practice proper nutrient and chemical management practices to reduce contamination of water bodies. Keep your eyes open for turtles to avoid running them over.

Learn how to recognize this species, do not disturb them, and report any sightings.

You can find Nova Scotia’s Species at Risk Conservation and Recovery website on the wood turtle and you can report signings of any species at risk (see here for a complete list) by emailing : sightings@speciesatrisk.ca

Clean Annapolis River Project (CARP) produced a report on the Nova Scotia population of wood turtles in and around the Annapolis River. See this link for the complete report.