Canada Geese are seasonal visitors to Nova Scotia. On their way through, they can cause issues for farmers and result in lost product.

Canada geese are very common on farms and can cause significant damage and contamination of crops. Over the past several decades, populations of Canada geese have flourished, mainly due to human-induced changes to the landscape. After the winter season, geese concentrate their feeding on different species of grasses and sedges, whereas in the fall and winter, they feed on berries, seeds and agricultural grains. Damage to grain crops, overgrazed pastures and degraded water quality are all a result of slowly increasing Canada goose populations. 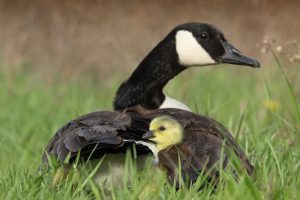 A mother goose and her gosling.

Canada Geese feed on grasses and sedges throughout spring and summer months, including leaves of skunk cabbage and eelgrass. Throughout the rest of the year, geese focus their efforts towards berries and seeds, and are often found foraging throughout agricultural fields. Geese also show a preference for blueberry crops.

Canada Geese favor habitats with short vegetation near water bodies. Parks, airports, golf course and even lawns can attract geese. These habitat types not only offer a convenient food source (grasses are easily digested by this species), but the short vegetation allows mature geese to keep a close eye on wandering chicks while also keeping watch for approaching predators.

Nests are built as large “bowls” on elevated ground (e.g. muskrat mound) built with dried grasses, lichen, and other plant materials, along with some down and body feathers. Canada Geese lay 2 to 8 eggs. Once hatched,  goslings will remain in the nest for about six weeks. Within days of emerging from the nest, the young can walk, feed and dive. 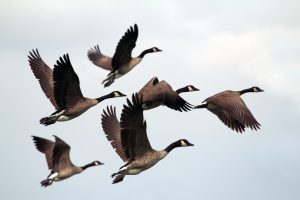 A flock of geese take flight. A common sight for farmers and landowners in Nova Scotia.

Generally speaking, no permit is required to scare geese off your property. If you plan to  kill geese, relocate live birds, remove nests or eggs, or scare geese off the property using a firearm or an aircraft you will require a permit. Permits are free, and can be acquired from a local DNR office.

Several techniques can be used to discourage geese from the property: