Plants and animals living in aquatic environments such as lakes, ponds, brooks and wetlands can be vulnerable to activities occurring on land including agriculture. Large-scale threats include the introduction of chemicals and nutrients into water bodies and siltation from run-off sediments. Slight modifications in land management practices can have a big positive impact on water ways and maintain them as suitable habitats for aquatic species as well as great spots for recreational opportunities such as fishing.

American Eels are long, slender, fish with a fascinating lifecycle. Juveniles (born in the Sargasso Sea near Bermuda over 1,300 km away) develop in the ocean and are transparent and small (glass eels). They migrate to river estuaries where they change into Elvers (brown, 5-7 cm long). Elvers develop into yellow eels which have a dark coloured back, a yellowish brown belly, and continuous dorsal and caudal fins. Males reach lengths up to 45 cm and females are even bigger; sometimes over 1 m.

An American eel in shallow water slithers among some rocks

They have tough, thick skin that is protected by a slippery mucus. After 9-22 years they go to the ocean become silver eels. At this stage they have white bellies, silvery sides and larger eyes, and migrate to the Sargasso Sea to spawn.

American Eels use freshwater, coastal and marine habitats during different stages of their lifecycle. They can be seen in coastal bays and estuaries, as well as freshwater lakes, streams, and rivers. They often use areas that are muddy and rocky with aquatic vegetation. Adult eels often spend the day buried in sediment or hidden in vegetation and come out at night to feed. They overwinter in burrows in both freshwater and marine environments.

Maintain the natural vegetation and habitat along riparian areas to preserve water quality, and use agricultural Best Management Practices such as limiting livestock access to water bodies, grassy strips, vegetated buffers, as well as cover crops to decrease siltation and runoff into all watercourses. Practice proper nutrient and chemical management practices and avoid alterations to watercourses. If you find eels in the waterways/lakes on or adjacent to your property, know they are an important species and they have travelled a long way! (over 1,300 kms)

American Eels are a federal species at risk, you can find out more and see a full list of species on the DFO Species at Risk website.

Nova Scotia’s provincial Species at Risk Conservation and Recovery program for the American eel can be found here, and you can report sightings to [email protected].

Bluenose Coastal Action Foundation has a project related to American eel conservation. Their site has a lot more information on eels and ways to get involved in conserving them.

The Brook Floater is a freshwater mussel that is typically 50-65 mm long and up to 30 mm wide. Its shell is yellowish brown to dark brown in colour and is kidney-shaped with horizontal growth lines along its shell intersected with tiny perpendicular ridges. It has a cantaloupe couloured “foot” (a muscular structure used for movement), which is visible when the shell is open. Its inner shell colour is typically and attractive bluish-white. 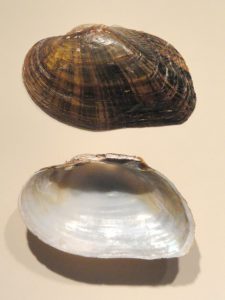 A brook floater shell showing both the interior and exteriorThe Brook Floater can be found in clean, moderately flowing rivers and streams with sand or gravel bottoms. In Nova Scotia, it has also been observed in clear water lakes with sandy bottoms.

Adults generally travel very short distances (centimeters to a few meters) per day. Dispersal of this species primarily occurs at the larvae stage when the organism is a parasite to fish. The tiny larvae attach to the gills and fins of host fish and may be transported kilometers away, where they drop off and mature into adults.

Increased sedimentation is the main threat to the Brook Floater, so reducing sediment run-off is the best way to help out.  Create habitat along riparian areas to preserve water quality and ecosystem function by leaving at setback or buffer between fields and the riparian area. Maintain the natural vegetation in the upper and lower portions of stream banks. Practicing proper nutrient and chemical management will also help improve water quality. Limit livestock access to waterways and avoid alterations to watercourses.

The brook floater is a federal species at risk, you can find out more and see a full list of species on the DFO Species at Risk website.

Nova Scotia’s provincial Species at Risk Conservation and Recovery program report for the Brook Floater can be found here, and you can report sightings to [email protected].

The Striped Bass is a large fish that can reach lengths up to 1 meter/39 in. in Canadian waters. This relative of the much smaller white perch has silvery sides with horizontal dark stripes, an olive green back, and a white belly.

Striped bass near its spawning grounds

The Striped Bass (commonly known as a Striper) uses many habitats throughout its life cycle and moves between fresh and salt water. Historically Striped Bass spawned in five rivers in Atlantic Canada, but now only spawn (springtime) in fresh or brackish waters in the agriculturally rich Stewiacke River watershed in Nova Scotia and in the Miramichi River in NB. Although only spawning in these two rivers, throughout the summer and fall, juveniles and adults can be found in saltwater and coastal habitats and the tidal sections of many Bay of Fundy rivers. They generally migrate to estuaries or freshwater rivers and lakes to overwinter from December to March, however they may also stay in the marine environment.

These fish can live over 30 years and generally spawn every year after they are 5-6 years old! They are an important part of the ecosystem because they are at the top of the food web. Depending on the stage of their life cycle, Striped Bass feed on zooplankton, worms, fish larvae, insects, herring, shad and other fish species.

How you can help? 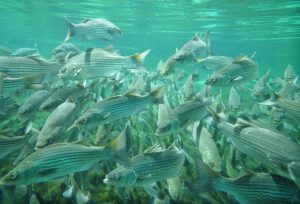 A school of striped bass

Many of the agricultural Best Management Practices (BMP’s) that are currently promoted by the Nova Scotia Department of Agriculture and included in Environmental Farm Plans to reduce overland runoff (excess nutrients, chemical contaminants and siltation) also reduce the impact on Striped Bass and other fish species and their spawning areas. These practices include vegetated setbacks from waterways, grassy strips around fields adjacent to waterways (and ditches), limiting livestock assess to waterways cover crops that decrease siltation and runoff into all waterways, proper manure/chemical storage and where applicable, a nutrient management plan. Developing and following an Environmental Farm plan would address many of these issues.

NS Department of Fisheries and Aquaculture programs and services, or contact them by email: [email protected]

The Striped Bass Research Team website is available here, and you can also check out the Track My Fish tool if you catch a tagged striper.