The Bank Swallow is a small swallow with long pointed wings and a slightly forked tail. Its upperparts are greyish brown and its underparts are white with a distinct greyish brown breast band.

The Bank Swallow is a small swallow with long pointed wings and a slightly forked tail. Its upperparts are greyish brown and its underparts are white with a distinct greyish brown breast band. It is quite plain compared to other Nova Scotia Swallows and is the only swallow in Nova Scotia that nests in excavated burrows. Males and females are similar in appearance and both make a continuous buzzy chatter while flying. 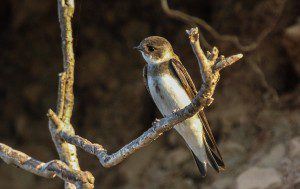 Bank Swallows (also called Sand Martins) occur throughout Nova Scotia and are found in areas that contain vertical banks such as riverbanks, bluffs by lakes/ocean and in human constructed sand pits where they build their nests by digging holes in the vertical surface. Generally they are observed from May to September in colonial groups near waterside banks. They are more common along the Northumberland Coast.

Since they prey on flying insects, their nesting sites are often close to open areas such as grasslands, meadows, hayfields, cropland, wetlands, riparian areas, lakes, oceans, and croplands.

Implementing or maintaining current agricultural best management practices around waterways, wetlands and coastal habitats with setbacks and natural vegetation will also provide nesting areas for bank swallows. In sand/gravel pits with vertical sides watch for areas with bank swallow nests sites (wrist size holes in the banks) and try to use 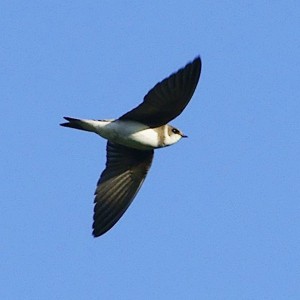 soils from other sections of the pits. Try limiting pesticide and chemical use that negatively affect non-pest insect populations. Bank swallow nests in the side of a small cliff

If you have barn swallows at your property or farm you can submit the sightings at eBird.org or by emailing Nova Scotia’s Species at Risk, Conservation and Recovery team at [email protected]