The Bobolink is a small bird (16-20 cm long) with a short, conical bill. Breeding males are black with a distinctive, large pale yellow patch on the back of their heads and a white lower back and rump.

A male bobolink perched on sweet clover after capturing a grasshopper

The Bobolink is a small bird (16-20 cm long) with a short, conical bill. Breeding males are black with a distinctive, large pale yellow patch on the back of their heads and a white lower back and rump. Most birds are light-coloured below and have darker upperparts, however, the bobolink has the opposite. Interestingly, some people describe the bobolink as if it were wearing a tuxedo backwards. Females are more sparrow-like with a crown alternating in dark and light stripes, a light brown breast, and brown, white and black patterning on the wings.   Its song is bubbly and complex, which closely resembles “R2D2” from Star Wars.

The Bobolink is found throughout most of Nova Scotia from May to September in open grassy habitats including hayfields, pastures, and abandoned farmland. (However Bobolinks appear to favour active hayfields.) It can also be observed in meadows near the coast. It is not usually seen in fields with short grasses, cropland, fragmented habitats, or areas near forest edges.

Nests are shallow cups built directly on the ground in fields and are often built near the base of a plant for better camouflage to prevent discovery by predators. Over half a million nests are unintentionally destroyed each year in Canada. Bobolinks eat the seeds of weedy plants and help control pest insects (insect larvae, adult insects, spiders, and other arachnids) in agricultural areas. 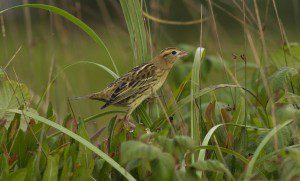 Consider delaying cutting hay until early July (or plant late-maturing cultivars) and keeping pasture areas un-grazed in July/August which will help prevent trampling, nest destruction and allow time for young birds to fledge. You can also modify your pattern of mowing fields to better allow ground-dwellers to escape the machinery.

Try raising the cutting height of machinery, and using flushing bars which will also benefit other at risk birds (Short-eared Owls, Eastern Meadowlarks) as well as Wood Turtles. Learn to ID these birds and submit sightings to ebird. Reporting sightings of these birds can be a project in which you can involve your children or grandchildren.