The Chimney Swift is a small cigar shaped bird (12-14 cm) with long, narrow, pointed wings, with dark brown plumage, a spiny tail, and a pale throat.

The Chimney Swift is a small cigar shaped bird (12-14 cm) with long, narrow, pointed wings, with dark brown plumage, a spiny tail, and a pale throat. It has a quick jerky flight. All ages and sexes are similar in appearance. The population in Nova Scotia has declined rapidly.

Before Europeans arrived in North America, Chimney Swifts used giant hollow trees for nesting sites. They still use this habitat today, but they also use chimneys and other human-built habitat in urban and rural areas. They typically concentrate in areas where insects are abundant, such as near lakes, wetlands and coastal marshes. Chimney Swifts can be seen from late May through September foraging high in the sky during the day. They are most easily seen around dusk when they fly into their roosts at high speeds, sometimes by the hundreds. Chimney swift in flight high in the air.

Pairs of chimney swifts are monogamous, and mate for life. One bird can eat over 1000 insects per day, which can reduce the number of insects including pests in a given area. Chimney swifts can only perch on vertical surfaces and can’t take off from the ground. For this reason, they require vertical rough surfaces for roosting like old chimneys.

Practice uneven age management in woodlots and, where safe to do so, leave big dead or old hollow trees standing. If possible avoid destruction of old abandoned buildings. These may provide habitat for roosting and nesting Chimney Swifts. Where practical, leave barn doors and hatches open to allow nesting birds to enter. Again, where practical and safe keep chimneys open rather than capping or lining, and avoid lighting fires from May to September. 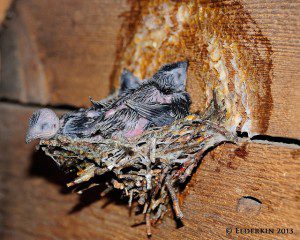 Chimney swift nest built on to the side of old barn boards.

See below for a video of some chimney swifts entering a chimney at Temperance Street Elementary School in New Glasgow.

The Canadian species at risk report on Chimney Swifts can be found here. You can also report a sighting by email to: [email protected]

The Maritime Swift Watch has great Nova Scotia and New Brunswick-specific information that shows the locations of know swift populations and allows the public to report sightings to: [email protected]

Mersey Tobeatic Research Institute has more information on the chimney swift and its conservation status in Nova Scotia.