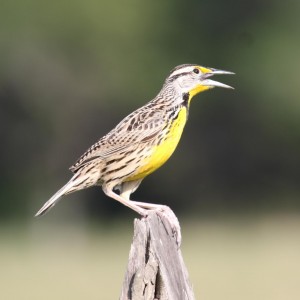 An eastern meadowlark calling from a wooden perch

The Eastern Meadowlark is a medium-sized songbird (22-28 cm long) with a long, pointed bill and a dark crown. It has a yellow throat and chest marked with a black “V”, and a yellow patch between the upper bill and eye. Its back is mottled brown, black and white and its song is a loud whistle of 3-5 notes.

Eastern Meadowlarks have always been rare in Nova Scotia and are dependent on agricultural lands as most native grassland habitat has disappeared. Although they can be found in open habitats including grasslands, pasture, and meadows, but they are usually seen in hayfields. They are rare in cropland and don’t eat crop species like corn or winter wheat.

Meadowlarks are masters of construction and build circular ‘cup’ nests, with side entrances and a roof! They are built on the ground out of woven grass and the birds begin construction in June.

Eastern Meadowlarks provide the ecosystem service of pest control in agricultural areas by feeding on insects (crickets, grasshoppers, caterpillars and grubs) and seeds of weedy plants. 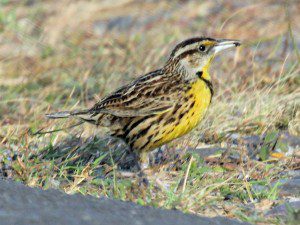 An eastern meadowlark on the ground after capturing an insect

Allow marginal areas of fields to seed with grass, which will provide nesting habitat for all grassland birds (maintain by mowing every 1-5 years). Where possible, delay cutting hay until early July, or plant late-maturing cultivars, and maintain a low livestock to pasture which will help reduce nest destruction and allow time for young birds to fledge.

Try raising the cutting height of machinery and use flushing bars which will also benefit other at risk birds (Bobolinks and Short-eared Owls) as well as Wood Turtles. Changing up mowing patterns to allow the escape of ground-dwellers like the bobolink and meadowlark can also reduce mortality on your farm.

Learn to ID these birds and submit sightings to ebird. Reporting sightings of these birds are great on-farm projects to involve your children or grandchildren.

Tallgrass Ontario has useful information on the habitat used by eastern meadowlarks. Find out more here.