Whip-poor-wills are named for the call that they make. In the early dawn and dusk these birds sound like they are saying “whip-poor-will, whip-poor-will”. 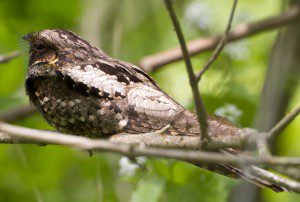 A whip-poor-will perched in a thicket of bushes

Whip-poor-wills are named for the call that they make. In the early dawn and dusk these birds sound like they are saying “whip-poor-will, whip-poor-will”. Their call is the best way to distinguish them from common nighthawks which are part of the same family and look very similar.

These birds have long slender wing but lack the white bands found on common nighthawks. The face of the whip-poor-will has noticeable whiskers that are used for detecting prey in the dark. The feathers of their face almost cover their small beaks, but they have a large mouth than can open wide to allow them to eat large moths which pack more nutrition than smaller insects.

Whip-poor-wills require lots of insects to eat so they are usually found in transition areas at forest edge where they meet fields. They nest on the ground in open areas with little vegetation, such as sand dunes, beaches, logged or burned-over areas, forest clearings, rocky outcrops, rock barrens, peat bogs, cropland and hayfields. They may also nest on flat gravel roofs.