The Gypsy Cuckoo Bumble Bee is a nest parasite of several species of bumble bees.

The Gypsy Cuckoo Bumble Bee is a nest parasite of several species of bumble bees. In the past, they have been recorded in every province and territory except Nunavut. However, they have seen a dramatic decline in numbers and since 1991 they have only been recorded in Ontario Quebec and Nova Scotia. Their distribution is likely determined by their host bumble bee species. 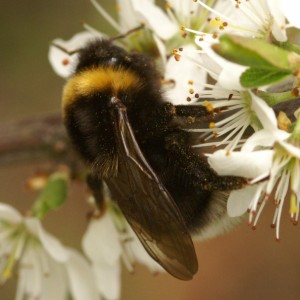 Females lay their eggs in host nests where the workers of the host species are tricked into caring for the eggs. In late summer and early fall they emerge and mate before finding an overwintering sites. Not much is known about the over-wintering requirements of these bees but it is thought that they will settle down for the winter underground or in piles of mulch, bark or woodchips. Nests of host species often occur in abandoned burrows and rotten logs.

Gypsy Cuckoo Bumble Bees occur in open hayfields, cropland, urban areas, pasture land, urban areas, and boreal forest. They feed on pollen and nectar from a variety of plants and can serve as natural pollinators to those plants. The most likely threats to this species are the decline of its host species (especially Rusty-patched Bumble Bee and Yellow-banded Bumble Bee in NS), pesticides and pathogens associated with non-native Bumble Bees that have escaped from commercial greenhouses.

Minimize use of pesticides and herbicides when possible.

The Xerces Society is dedicated to conservation of insects and other invertebrates in North America. Visit their site for more information on conservation best management practices.

BeeFriendly.ca is a Canadian website dedicated to the conservation of bees throughout the nation. There is plenty of information to find about threats to bees and how to help.