The Eastern Ribbonsnake is a long, slender, semi-aquatic snake (up to 70 cm/28 in.). 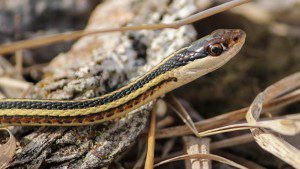 The Eastern Ribbonsnake is a long, slender, semi-aquatic snake (up to 70 cm/28 in.). It is jet-black with three yellow stripes running from head to tail along its back and sides; it has a caramel brown shade on the lower sides, and a white tear-drop scale in front of each eye. It is a gentle, harmless, non-poisonous snake. (None of Nova Scotia’s five species of snakes are poisonous). The diet for the Eastern Ribbonsnake generally consists of tadpoles, salamanders, small fish and frogs, toads, and insects.

The Eastern Ribbonsnake occupies stillwater streams, marshes, swamps, bogs, lakeshores and adjacent habitats near agricultural areas in Queens, Lunenburg and Annapolis Counties. These snakes can be observed in upland habitats such as fields, forests and open areas especially in the spring and fall. Eastern Ribbonsnakes are typically observed around wetlands in spring and along tracks and roadsides near water in summer. They are also seen swimming along water’s edge, or curled up under cover.

How you can help

Snakes in Nova Scotia play an important role in pest control in agricultural areas by consuming species such slugs, caterpillars, snails and a variety of insects. Snakes are often seen crossing roads including field roads. Try to avoid running over snakes with vehicles. Incorporating best management practices (BMP’s) for your agricultural operation will also help reduce the farm’s impact on the Eastern Ribbonsnake as well. These BMP’s include limiting livestock access to water bodies, maintaining grassy strips along the edge of croplands/pastures and vegetated buffers along waterways/around wetlands, as well as planting cover crops that decrease siltation and runoff into watercourses. Raising the cutter heights and using flushing bars will also help reduce mortality of Eastern Ribbonsnakes and other wildlife. 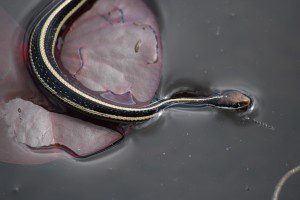 Ribbon snakes are semi-aquatic and are great swimmers

Nova Scotia’s Species at Risk Conservation and Recovery plan for the eastern ribbon snake can be found here, and you can report sightings to: [email protected].

See this link for more information on the eastern ribbonsnake and the conservation programs being led by the Mersey Tobeatic Research Institute.