The Eastern White Cedar is an evergreen tree that grows to a height of 20 m with diameters of 60 cm or, more commonly, much smaller. A large eastern white cedar with its distinctive ‘peely’ bark

The Eastern White Cedar is an evergreen tree that grows to a height of 20 m with diameters of 60 cm or, more commonly, much smaller. It has flattened branches with small ‘scale-like’ leaves (1-2 mm). The reddish-brown bark has distinctive narrow vertical lines that tend to peel easily. The clustered, egg-shaped cones are yellow-green when immature and brown when mature.

It is concentrated in western Nova Scotia and found in riparian areas along streams, in swamps, along lakeshores, in woodland forests and in old pastures. It usually grows cool, moist, shaded areas that are nutrient rich. It thrives in moderate drainage conditions that are neither too wet nor dry. Although the habitats it occurs in are varied, there are only a few pockets of White Cedar in the province. Rare in Nova Scotia Eastern White Cedar is common in other areas of Canada.

The Eastern White Cedar plays an important role in Mi’kmaw rituals including smudging ceremonies. It is a valuable wood product due to its high decay resistance, and is used for shelter and food by many birds and mammals. 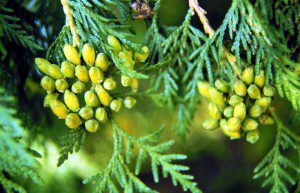 Learn how to identify the Eastern White Cedar, report locations of sightings (see websites listed below), and refrain from harvesting them. Avoid clearcutting and use uneven age management practices in woodlots. Try to leave wetlands, lakes, and stream banks in a natural state and allow vegetation to act as erosion controls.

Like with any species at risk in Nova Scotia you can register the presence of Eastern white cedar by emailing Nova Scotia’s Species at Risk program at: [email protected]